SensControl is a device enabling IO‑Link devices to be configured and analyzed. The serial number and other information are on the sticker on the underside.

The SensControl app is available in Apple AppStore and Google PlayStore. From your device, open the store and enter „SensControl“ into the search box.

The SensControl app sources definitions for IO‑Link devices (IODD) from online memory. The app currently accesses https://www.ioddhub.com, where it searches for device definition files for IO‑Link devices. Other portals and storages can be integrated into the app as soon as they are available.

The SensControl app stores IODD files downloaded previously, and associated images, in an offline cache. If the files required have been downloaded before, the app can also be used without an Internet connection.

A conventional Mini USB cable can be used to charge the SensControl. The USB cable can be connected to a conventional charger for mobiles or to a PC/laptop. Whilst a PSU or other power supply is connected to the USB port, IO‑Link devices with a power consumption up to 200 mA can be run. The fastest charging times are attained using a powerful charger delivering a charge current of 2000 mA. According to the manufacturer, the batteries support about 500 charge cycles. Refer to the website (www.baumer.com/SensControl) for more information.

To switch between the “Master” and “Sniffing” modes, press the button 3 times within 3 seconds (triple click). LED2 indicates the mode accordingly (refer to Section “LED indicators”).

Resetting to the default settings

Keep the button pressed until all LEDs light up, and then go out in sequence from right to left (approx. 10 seconds). The SensControl is now back in the state as delivered and bears the name and WLAN SSID as on the sticker on the underside of the device.

If modern, IO‑Link capable, 4-wire devices are used on older systems, SensControl makes available the full IO‑Link functionality of the devices. For this, the device must be configured such that connector Q2 is switched as an output, and it makes available the original function of a conventional device. SensControl connects output Q2 to the master and permits in parallel communication to the IO‑Link device. 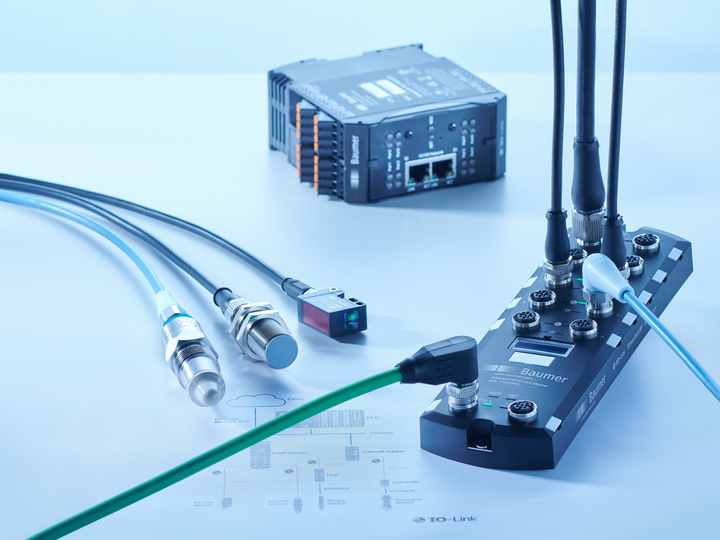 Benefit from the data provided by present-day intelligent sensors to enhance process transparency, to improve efficiency and to cut down on costs. Find out here how IO Link will be of help.