Functionality and technology of ultrasonic sensors

Ultrasonic sensors are the allrounders in the world of sensors and are suitable for virtually any detection tasks in industrial applications. The objects to be detected can be solid, liquid, granular or in powder form. They reliably detect transparent or high gloss objects as well as objects of changing color. Being extremely tolerant to dirt, the efficiency of ultrasonic sensors comes into its own especially in harsh working environments, as process reliability is not adversely affected by dust, smoke, mist or similar.

Most ultrasonic sensors are based on the principle of measuring the propagation time of sound between send and receive (proximity switch). The barrier principle determines the distance from the sensor to the reflector (retro-reflective sensor) or to an object (through-beam sensor) in the measuring range.

Ultrasonic proximity switches are the simplest form of ultrasonic object detection. The transmitter and receiver are integrated in one housing. The ultrasound is reflected directly from the object to be measured to the receiver. Ultrasonic sensors with teach-in function differ from conventional types in that they offer easier and more varied operability with the simple push of a button.

The retro-reflective sensor operates in accordance with the same principle as the ultrasonic proximity switch. Sound propagation measurement determines the distance from the sensor to the reflector or to an object in the measuring range. Any sound reflecting, stationary object can be used as the reflector.

A special sonic transducer is used for the ultrasonic proximity sensors, which allows for alternate transmission and reception of sound waves. The sonic waves emitted by the transducer are reflected by an object and received back in the transducer. After having emitted the sound waves, the ultrasonic sensor will switch to receive mode. The time elapsed between emitting and receiving is proportional to the distance of the object from the sensor.

Sensing is only possible within the detection area. The required sensing range can be adjusted with the sensor's potentiometer or by electronic Teach-in (Teach-in button or remote Teach-in). If an object is detected within the set area, the output will change state which is visualized by the integrated LED.

Sonic waves are best reflected from hard surfaces. Targets may be solids, liquids, granules or powders. In general, ultrasonic sensors are deployed for object detection where optical principles would lack reliability.

The standard target is defined as a square flat object of following sizes:

The target should be mounted perpendicular to the axis of the sensor.

To ensure a reliable object detection, the reflected signal must be large enough. The intensity of the signal depends on the size of the object. Using a standard object, the full scanning distance Sd is available.

The sonic cone profile charts as found in the spec sheets of this catalog represent the active sensing areas for ultrasonic sensors. The charts demonstrate the short-range sonic side lobes, which widen the sensor's close-range aperture angle. Due to sound absorption and air diffusion, the lobes decrease at longer ranges. Size, shape, surface properties and the direction of target detection have very high influence on the lateral detecting region of an ultrasonic sensor. Sonic cone profiles apply to the whole product family, e.g. a 100 - 1000 mm profile is representative for all related sensors of the same sensing range - digital or analog outputs, etc.

Standard square targets made of steel are used to determine the shape of typical sonic cone profiles.

The targets are positioned perpendicularly to the sensor's reference axis, approached sideways at different distances. The sonic cone profile is then plotted by connecting the measured points with a line. The cone shape can vary if round or differently shaped objects are detected.

The standard target is defined as a square, level object with an edge length of 30 mm (Sde > 1000 mm: 100 mm edge length, Sde ≥ 2500 mm: 300 mm edge length) which is perpendicular to the sensor reference axis. The reflector must be made of a material with good sound reflection properties and be at least the same size as the target. 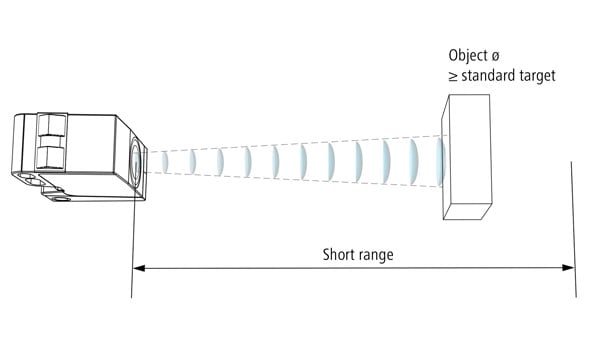 For reliable detection, the sound cone must be covered completely so that no echo is returned from the reflector. The object diameter necessary for this is at least 30 mm in URDK 30 and at least 100 mm in URAM 50. 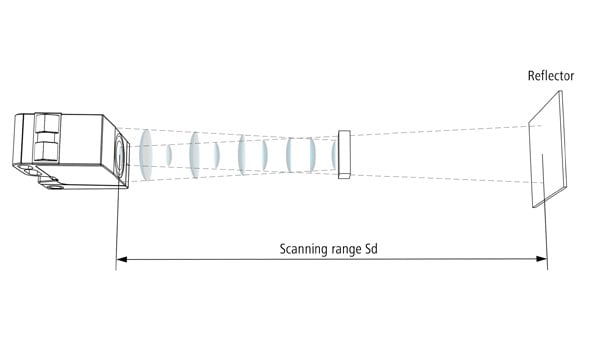 Object in the rest of the operating range

With the help of the built in potentiometer, the user can adjust the amplification of the input signal, as necessary.

The state of the output stage as well as the signal intensity are indicated by an LED.

The sonic beam angle (α) defines the boundaries of the emitted conical beam of the ultrasonic through beam sensor.

Due to the narrow angle of the sonic beam the repeatability of the switching point of two successive targets, under identical conditions, is better than 3 mm.

Hysteresis is the difference between the operating point (S1) and the release point (S2). If an object interrupts the sonic beam, the signal level must be increased by about 75 % in order to reset the output signal. Objects which follow one another in quick succession can therefore be easily detected.

The sensor provides a distance proportional analog current or analog voltage output, allowing simply applied, non-contact distance measurement. Based on the pulse echo technique, the measured distance value is output as a voltage value. The output current or the output voltage is proportional to the distance of the object to be detected.

With distance measuring sensors, the output current or the  output voltage is proportional to the distance of the object to be detected. The steepness of the output curve can be modified, depending on the sensor, via a potentiometer, teach-in or qTeach and optimally adapted to the respective application. Applications having long cable runs where there might be EMI or RFI interferences, should use sensors with an analog current output. 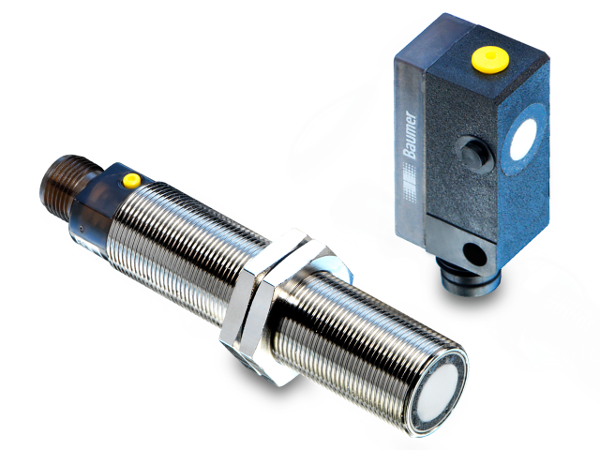 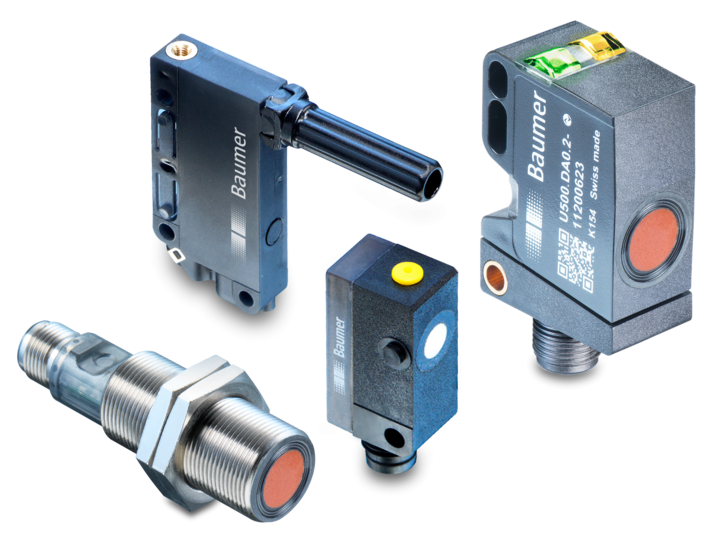 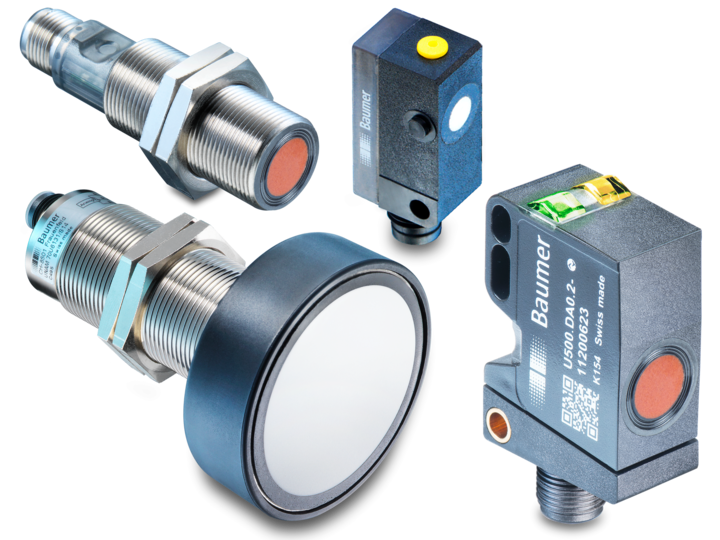